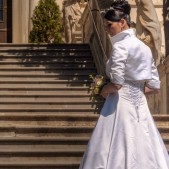 Yad Eliezer is breaking the cycle of poverty

Ariella was new to our community, but she greeted each guest at her wedding as if they were an old, dear friend, and that's exactly what I felt I was. She was a recent convert to Judaism, and her curiosity, dedication and purity of intention were clearly apparent. As I got to know her more I saw that she was a person of deep integrity who was up to any challenge that she faced... and there were many.

She needed to learn Hebrew, and understand a culture that was very different from her native Illinois. The city where we live, Tzfat, is known to be a difficult place to find work, even for native speakers, but Ariella rose to the challenge and found employment. Not only was she ready to face challenges head on, she did so with so much faith and grace that she made it look easy.

But that was only the beginning. As children came into the picture the responsibilities mounted and Ariella found that she was the only one shouldering the burden. Her husband's behavior was erratic and sometimes frightening. Soon enough divorce was the only option that would allow her to raise her children with any sense of emotional stability.

Ariella found herself a single mother of a few small children ten thousand miles from home. While her Hebrew improved it was still far from fluent. Now she was faced with the full weight of keeping her family afloat. Perhaps it would have been easier if she had abandoned her commitment to Judaism and returned to the shelter and support of her parents' home, but that was never an option that she considered. She was fully devoted to her faith, and her faith supported her through the hard times. Each time I spoke to her I heard her calm determination, unwavering spiritual conviction and felt the warmth of joy radiating from within her.

As they say, it's a small world. One time when I spoke to Ariella she told me that she was getting some financial support from Yad Eliezer, where I work. Recently she sent in this letter to thank the Yad Eliezer donors and supporters, and I'd like to share it with you.

I just wanted to share a little something with u..
3 yrs ago u paid for a life coaching course for me in Tsfat which changed my life...
I finally found how I can truly give back to society and really help ppl lives and loving it all at the same time!
Unfortunately due to the circumstances I had to move cities without having the possibility of completing the course..(just had a couple of months left)
Once i moved I tried to travel back and forth in order to finish it but found it impossible to continue.
And several time after that I was in contact with my teacher to try and figure out how I would be able to finish the course in order to get my certification and start working in my field.

Yesterday was the first class in Jerusalem given in hebrew..WOW..i tried.. not sure of my comprehension in hebrew would b , and to my great surprise..i understood it!!
Right time..was now and so learning hebrew the best way possible and finally finishing up this course!

This might not mean much to u but this course changed my life..and i have acquired tools in order to achieve my goals and will try to do the same for others..

Don't ever stop what ur doing...u have no idea
How beautiful ur work is ..giving hope, encouraging ppl and most of all ..CARING!
(And actually doing something about it!)

Infinite blessings to u and urs and everyone that works with u that makes these miracles a reality!

Have a beautiful day!

*Name and identifying details have been changed to protect privacy
I first met Ariella* ten years ago, not long before her wedding. I was awed by her beauty - inside and out, and her engaging personality helped us to quickly become friends.