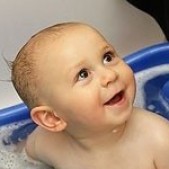 When I noticed in the middle of the night that he was hot, crying and irritable ... again, I lifted him out of bed and took him to the bathtub to wash him, cool him down and clean him up. He was still half asleep and did not appreciate my herculean efforts to calm and settle him. In the midst of the crying and oozing baby Tylenol syrup, he looked up at me with his big brown eyes, clearly miserable. And despite my frustration and exhaustion, I could not hold back, I cradled him in my arms. He was reassured.

Once he had calmed down and I was rocking him back to sleep, I started to think. Here we are in the Hebrew month of Elul, the time of mercy and forgiveness. We turn to HaShem, asking him to wipe away our indescretions and make us worthy of blessings for a good new year. Sometimes the task of trying to become worthy feels way beyond my capacity. But in that moment I knew that just as my love for my baby overwhelmed any aversion I may have had to the difficulties, and I could not hold back my love, the love that my Father in Heaven has for me overwhelms any repugnance He may have from the contamination on my sins. I lift my eyes to Him.

Then I remembered a dream that I had, as I was waking up to care for the baby. I was sitting on the edge of a mountain. On the other side were friends of mine that I haven’t seen or heard from in many years. Between the mountains was a very deep chasm. But it was very narrow. We were close enough to step over the deep precipice and be together. But because the chasm was so deep it seemed almost impossible to take the chance and step over it.

Elul and Rosh HaShana are times to step over that abyss. Times to reconnect- to ourselves, our families and friends, and to HaShem. One way of connecting to HaShem is to help others who are lifting their eyes to Him and asking for help. Let’s have the courage to step over that chasm.