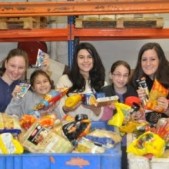 A group of young ladies came to the warehouse recently to volunteer, but had no idea what was waiting for them. They expected to pack food boxes for needy families, which would have been a worthy enough morning, but they left more deeply moved than they would have ever expected.

They were introduced to Yad Eliezer, and then shown a short video about the organization. When the video ended Yossi Kaufman who hosted the group saw that there were few dry eyes left in the room, so he put on The Red Wagon a short more upbeat video to put a smile on their faces.

When the video ended one of the young ladies raised her hand and asked if she could say something. Yossi invited her to the front curious as to what she had to say.

"This is very emotional for me. When I was younger my family wasn’t managing very well. If it were not for those blessed boxes that would arrive each month from Yad Eliezer we would have gone to bed hungry most nights. On Shabbos almost everything that we ate was generously provided by Yad Eliezer. I never had the chance to say a proper thank you, but what better way to do it than to pack boxes for other families in need!"

Her friends were all deeply moved and went to pack boxes putting their hearts and souls into every single one.