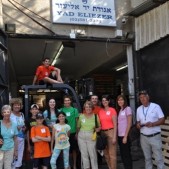 When I went to the warehouse to see volunteers in action, I heard from Yossi Kaufman, the Director of Public relations about two special families who had recently volunteered there.

The first was the Paley family who had flown in from Milwaukee with fifteen members of the extended family in honor of Avi Paley’s bar mitzvah. They had gone cherry picking up north end ended up with enough cherries to last until Avi’s wedding. The Paley Bubbie works in a food pantry back home, and suggested that they find somewhere similar in Israel to donate the cherries, thus enters Yad Eliezer. Avi’s father explained to me that giving to the community and being connected with other Jews is very important to their family.

“We wanted to do something that would be fun for the whole family on our last day here. Yes packing food boxes was a lot of fun! When we got back we gave a pile of brochures of things that we did to friends who are planning a trip in the future. At first they didn’t understand what the Yad Eliezer pamphlet was doing there, but we explained to them that volunteering was one of our best experiences in Israel!”

I was also very impressed by the Lyss family. Such creativity and initiative. Dr. Loren Lyss is a physician in new born intensive care. His schedule is very demanding, and he was feeling that he was spending much more time with other people's children than with his own. He was also concerned that the children would take for granted the comfortable lifestyle of Seattle. He wanted them to understand the challenges of the human condition as well as reconnect with them in a meaningful way. So what do you think he did?

David and his wife Julie took their three kids, Shira (11), Aviva (9) and Isaac (5) on a ten month world tour. The visited Thailand, Vietnam, Cambodia, Turkey, England, Costa Rica, Peru, and Israel. The theme that connected it all was ‘mitzvah projects’; everywhere they went, they looked for opportunities to help the communities that they visited. In many places they found that younger children were not welcomed to volunteer, and that was challenging, but at Yad Eliezer they had an experience that was fun and purposeful to the whole family.

David explains, “My daughter Shira especially enjoys giving of herself when she feels valued, and can see the results of her work immediately. Both were true at Yad Eliezer. Yossi did an incredible job; he spoke to us inspiring us and making us feel welcomed and important. Shira insisted that we go back a second time. At times it was shocking to the family to see how little others have, but it is meaningful to be part of the solution, and it puts our lifestyle in prospective.”

When I asked David how the trip has changed is family, he is thoughtful. “It was a life changing experience. The impact on my relationship with the kids as they enter adolescence is a bond that will endure. In today’s world the value of that cannot be overestimated.”