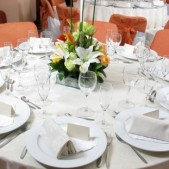 A Great Way to Start the Day

I had heard bits and pieces about the Adopt-a-Wedding project from Milka, who told me that she used to prepare the techina for the weddings, but for the full story I figured that I should ask Sara, who runs the project. As I walked into her office, I overheard her conversation on the phone: “Yes, I have your bank information here. I will be transferring $2600 in the next few days... Don’t thank me, thank HaShem! I am just the lucky messenger... Yes, I wish you all the blessings as well...”

“Yes, this is my absolute favorite part of my job! This woman told me last week that they are
so overwhelmed by the expenses they are facing that when she served her husband dinner he
looked at it and told her that he just couldn’t eat. His stomach was too heavy with the weight of
his debts. He is working very hard but it just isn’t enough. Can you imagine how it makes me feel
to lighten their load? Aside from the money, we were able to give them vouchers to buy basics
for the home of the newlyweds: linens, towels, an electric kettle and more. The wedding is in a
few weeks and she hadn’t bought anything until last week!”

I asked her to tell me about how the wedding project started. She smiled nostalgically. “Can you
believe that it’s been 24 years? When Hadassa Viesel started Yad Eliezer, she and her daughters
collected food from some neighbors and sent it to other neighbors who weren’t managing. Then
they heard about a bride who had nothing with which to make a wedding, so they divided up
the cooking between them and arranged for a modest wedding in a nearby shul.” Sara helped
Hadassa organize the whole project, and did some of the cooking as well, and of course Milka
would make the techina.

“Before long we were making three or four weddings a week. The families would pay a minimal
amount to cover expenses. Tsipora would bake the chickens in her house, and others would
make the side dishes in huge pots that we bought and distributed. We had a driver who
would collect the pots in the evening and take them to the hall, and in the morning he would
bring them back clean for the next round. We employed waiters and waitresses who were
impoverished themselves. They were happy with the tidy sum they would make from each
wedding, and would gladly take home to their families any food that was left.

“Sori Tropper got involved and found families who were pleased to ‘dance at two weddings
on the same night’: the wedding that they were making in America, and the wedding of a poor
bride in Israel. Soon we realized that we had outgrown ourselves and needed to upgrade. A
generous donor helped us create an industrial kitchen, and the Adopt-A-Wedding program
really took off. Then, about seven years ago, a generous grant helped us open Armonot Wolf,
our very own wedding hall that hosts two weddings a night. We also cater weddings in up to
four additional halls in Jerusalem at our discounted rates. There are nights that we prepare
1,700 portions!”

“Wow, that’s a lot of rice and chickens!”

“It sure is! You should go see our kitchen and store room; I’ll bet you’ll be impressed.” I think I’m
going to do just that! I’ll let you know how it goes.