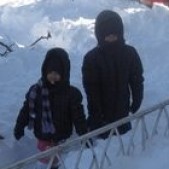 The Cold of Winter

The Jerusalem winter blew in on the sixth day of Chanuka this year. Up until then, sunny skies and balmy days had left many Israelis scratching their heads in confusion. Normally the swelter of August turns around during Elul, when a fresh pick-me-up in the breeze smells like fall. Winter can’t be far behind.

This year was different. The months had passed with nothing but a few cold nights. Many fervent prayers were said for much needed rain, but the skies seemed locked, blue and oblivious.

Until Chanuka. All at once, the temperature dropped like a fall off a cliff and suddenly the rain arrived. Bitter winds scoured the golden cobblestones and black asphalt of the old and new city. Windows were fastened, coats mended and umbrellas were dug out of their long-forgotten corners.

Except that those commodities, the normal living conditions that most of us take for granted were exactly what Pazit* didn’t have. Her daughter Razia* was only six years old. She had just started first grade and winter caught her of guard. It wasn’t that Pazit didn’t want to take care of her child as she cried and shivered with the flu. It wasn’t that she didn’t want to provide Razia with the warm home and nutritious food that the little girl needed. It was just that she couldn’t. She couldn’t provide Razia with warmth and with nutritious food because she lost her job. When Yad Eliezer visited their small, frigid apartment to bring Pazit and Razia an electric radiator, Pazit laughed bitterly. “Thank you very much,” she told her visitors, “But who will pay the electricity bill?”

Other stories from the cold in Jerusalem include Ron’s*. Despite the thin, threadbare blankets that his worried mother piled on his thin body, the cold in the unheated apartment was just too much for the small boy to fall asleep.

The few families that Yad Eliezer’s limited budget does allow to help respond with tears of joy. Sima* literally cried for gratitude when she received the phone call announcing that, yes, Yad Eliezer had found a donor to pay the gas bill that had kept them from being able to light their heat. Another woman, an elderly widow living alone, had swallowed her pride and brought her electric bill to Yad Eliezer when the electric company cut off service despite the bitter cold. When a donor told us that she would cover the widow’s electric bill, we all cried.

Perhaps the starkest example of the long arm of poverty was Yael*. She is eight and she would stay in the office for hours. She didn’t have a coat and her apartment was too cold to bear. She came in one day literally jumping from cold. That very same day, a coat arrived with a note from a donor, who wrote, “I hope someone can use this coat, since my daughter has grown way too big for it.” Little did she know how much it would be used!

Your donations buy so much more than food, coats and warmth. They buy the force of kindness which pushes away the cold, the hunger and the pain that are the usual companions of severe poverty.