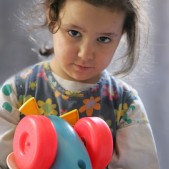 One Good Turn Deserves Another

Ram Oren* had a wife, kids, and a stable job. He worked at a toy factory near his home in Gush Katif. Ram had never heard of Yad Eliezer, and hadn’t needed to. The utility bills got paid every months and there was always enough money to take care of the family. Groceries were bought. Family trips were happily taken. Life went on as usual.

Until Ram got fired. It reads like a bad novel – laid off from a toy factory. But the picture got a lot worse as the global recession hit harder. Finding a job became near impossible. Now Ram heard about Yad Eliezer. One Wednesday in August*, he phoned the offices up to ask for an application form for food boxes. The Oren family could no longer afford even the basic necessities.

But sometimes when life sends you a curve ball, you manage to hit it out of the park. Ram wasn’t about to give up so quickly. Picking up the pieces of his life, Ram continued to research and apply for jobs until he finally accepted the inevitable: the only person who would hire him in this economic climate was himself.

Ron decided to strike out as an entrepreneur. Today Ron owns and manages his own toy factory. This Chanuka, Ron phoned up Yad Eliezer to say thank you. He wanted to know whether he could donate some of his toys to children in need. Children just like his own, who had felt the same way not long ago.

That’s the Yad Eliezer story. It doesn’t end with food boxes. It doesn’t even end with a full recovery from poverty. Yad Eliezer is a family and it just keeps growing. One good turn invites many more and the warmth and chesed continue.

Join the Yad Eliezer family and put a smile on people’s faces – including your own.

*These details are anonymous.