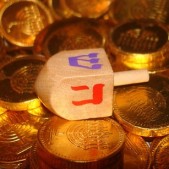 It was the seventh day of Chanuka 2009. Throughout Israel, men and women would be leaving work in just a few hours to rush home and light Chanuka candles. As the cold winter evenings went on, first one, then many tiny lights appeared in the windows of homes all over the country. A quiet, golden glow seemed to envelop the dark, cold streets.

The Stein* family trooped into the Yad Eliezer offices wearing thick coats and wide grins. With eight children plus a new baby in tow, it took a few minutes to get oriented. “May I help you?,” asked Milka with a smile.

“—We’re here to give tzedaka!,” piped in a high-pitched voice. Milka looked down to see five-year-old Avrumi flashing an adorable, toothless grin.

“The children have each received Chanuka gelt,” explained Mrs. Stein as she helped three-year-old Adina out of her coat. Gesturing to the small crowd around her and her husband, she continued, “When we told them about Yad Eliezer, they all wanted to give their Chanuka gelt to the hungry children who need food.”

“Thank you very much!,” said Milka in surprise. It wasn’t every day that a family of ten walked into the office to each make individual in-person donations. And certainly not from donors as young as three years old.

After offering the children cups of hot chocolate from the kitchenette, Milka settled down to receive the donations. As each child, and some teenagers, shyly approached to hand their envelope over to Yad Eliezer, Milka wrote out individual receipts for each one of them. Receipts to be glued to journal pages, brought in to show-and-tell, or stuffed away in drawers to be pulled out one day months later and remembered in a momentary flush of happiness.

“And here is our donation, as well. Thank you so much, Milka,” said Mr. Stein as the family put coats back on, bustling around getting ready to leave.

This year, let your Chanuka mean more. Join the Steins and light up a life with Yad Eliezer.