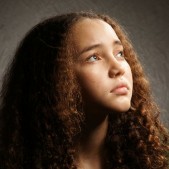 "But We Need Help Now"

Lital also gets her brothers and sisters off to school every morning, which leaves few hours before the afternoon shift starts again. Sure, Lital used to go to elementary school, but concentrating on the material was difficult when worries about her father’s chemotherapy and her mother’s depression filled her mind.

“Good” high schools weren’t interested in Lital’s sob story. All they saw was a troubled child with poor grades. Lital is smart and hard-working, but a pending, maybe-yes-maybe-no acceptance to a mediocre high school is all she has to hope for at the moment. The school year started over a month ago. Lital is only fifteen and her life is already at a standstill.

Lital visited Yad Eliezer last week because she didn’t have anyone else to turn to. Her father had gone into remission but the anxiety of coping with a life-threatening disease, not to mention physical pain, hospital bureaucracy, financial strain, and the breakdown of his family had all pushed him over the edge. Lital’s father had not been seen or heard from in a week. She knew he would come back eventually – he ran away often since his diagnosis – but for the meantime the family was fatherless. Her mother’s depression kept her listlessly stationed on the couch.

Lital looked Milka firmly in the eye. “There is no food for Sukkot and the younger children have nothing that fits them to wear.” The look in her eye was far too strained for a fifteen year old. “When my two older brothers were younger, they used to be a part of your Big Brothers program. We applied for my younger siblings to receive Big Brothers and Big Sisters this year. You send us food boxes once a month.”

Suddenly the weary teenager broke down crying. “But we need help now.”

Milka reached out a soft hand and pulled Lital towards her. It wasn’t the first time someone sat crying by her desk and it wouldn’t be the last. But it never, ever got easier.

Yad Eliezer was able to provide Lital and her family with several supermarket vouchers for the upcoming Sukkot holidays, but thousands more just like her are turned away every week due to budgetary restraints. You can change that. Donate to the Yad Eliezer Sukkot Fund today.