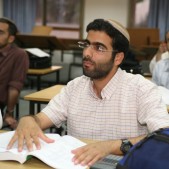 Sharon’s* mother got out of jail a few months ago. Her father is still there. Sharon grew up in a home filled with drug use and traffic where healthy boundaries didn’t stand a chance. Neither did having a healthy childhood, or having any hope for a better future. But Sharon hoped anyway. She hoped with a vengeance.

Sharon grew up with little help from her parents and tried to make good for herself every step of the way. Getting through high school wasn’t easy, but Sharon did – despite a learning disability that was only finally diagnosed in her twenties.

Meeting and marrying Tal* was a little easier. Tal’s background, although less challenging than Sharon’s, also left him on his own. Tal and Sharon were thrilled to find each other, and determined to make their dreams of a healthy family and a better future come true.

Except reality and dreams don’t always come together. The economic downturn in Israel left Tal unable to find a job. A high school degree with no further training just didn’t go very far in a cut-throat job market. Tal didn’t stand a chance, Sharon even less so.

Tal and Sharon turned to Yad Eliezer when they had nowhere else left to turn. Having exhausted their options, the tenacious young couple clung to the hope that there was something better for them out there. Tal and Sharon prayed that Tal would qualify for the Yad Eliezer Job Training Program and that they would be given the chance to build their future.

When Tal was accepted to the Job Training Program, the young couple were overjoyed. But little did they know quite how meaningful that acceptance would be. Tal’s two years of training as a computer programmer uncovered something much more valuable than credentials alone: a sharp mind and a natural talent. Tal worked hard to earn his degree and left ready to find a job. This time, Tal found one.

Today Tal works as a successful programmer with an Israel-based firm while Sharon works as an assistant kindergarten teacher in their suburb outside Jerusalem. And the future they hoped for is becoming a reality: the small family are now regular Yad Eliezer donors themselves.

Ask them how they feel about the donations that helped make their dreams come true and they will tell you a truth that they earned the ability to preach: “Anything is possible.”