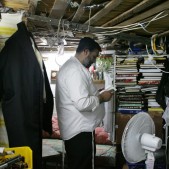 The Poor Man in the Hallway

Dov Weisel is a modest man who runs from honor.  His office sports a wooden desk crowded with drafts and documents, a small round table for discussions, several chairs, and a large bookcase. It’s an important office for important meetings, but no meeting is more important to him than greeting the poor.

“A few years ago I was sitting with an important philanthropist,” Dov told me with one of his characteristic smiles. “We were in the middle of a meeting that could affect the lives of hundreds. The discussion was going well when we heard a commotion in the hallway.”


A bedraggled indigent stood in the corridor demanding to have a word with the manager. He had been asked to wait, and explanations had been given. Chairs were available in the waiting area and the receptionist had offered to get him a cup of coffee. Nonetheless, the poor man demanded to see the manager now.

Dov admitted, “To tell you the truth, I was getting agitated. It was a very important meeting. But my father, who was sitting in on the meeting with me, explained that Yad Eliezer hadn’t been started for the philanthropists � they started it for people like the man out in the hallway.”

Rabbi Weisel, Dov’s father, suggested that Dov go and find out what the impoverished man needed to see him about. It would only take a minute. He gently explained that the philanthropist was there to help the poor man, not the other way around.

The philanthropist was nothing but impressed, and Dov told me that he learned a lesson.

“My father is a gadol b’yisrael, a very great man. Everything he does is l’shem shamayim, for the sake of heaven.  Supporting his mission is the greatest honor.”

I agree with Dov. How about you?