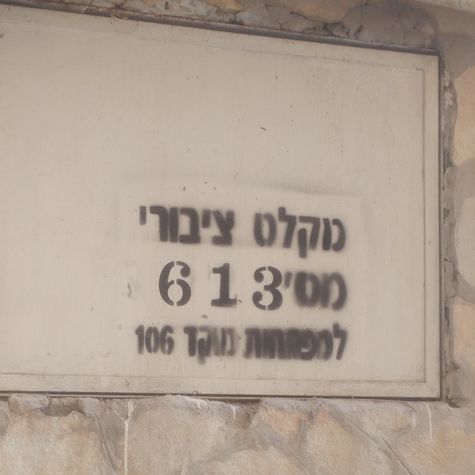 A Miklat on Polansky St.

Since 1951, there’s been a law in Israel requiring all homes, residential buildings and offices to be built with bomb shelters or “safe rooms”, in Hebrew usually referred to as a “miklat”.

I’m sure you’re wondering why it’s called a miklat. The word means refuge/shelter and creating places of refuge is one of the Torah’s mitzvot. (You can read about this here

In peaceful times in Israel a miklat might be used as a storage room, small office or depending on the size, even a spare bedroom or activity room. But in stressful times (for example, recently in Israel’s south) citizens know that in an emergency the miklat is the place they should run to, for safety and help. Each miklat has its own “character” and each one has its own assigned number.

Since 1980, there’s been a special place of refuge for people who are faced with all different kinds of life challenges and are in need of help. Some are parents of families battling hunger on a daily basis, including every Shabbos and Yom Tov. Others are single mothers who, despite their best efforts, can’t provide the most fundamental needs for their children on their own. Still others have run into emergencies, like being faced with a last minute eviction-but having no money for moving costs. Or being unable to pay an overdue electric bill which causes the heat to get turned off in the dead of winter, or an unexpected, unaffordable medical bill which, unpaid, endangers a life. The types of challenges and emergencies are endless, yet people know that on a nondescript street in Jerusalem a unique miklat-of-sorts is open to all in distress-

Yad Eliezer has been working to ease emergencies and provide circumstantial shelter for thousands of people for more than thirty eight years. What started out as a “mini-miklat” (the Weisel’s living room where a few hungry neighborhood families would come to collect a modest food basket) has grown to a major organization that runs more than 20 social service programs, reaching out to help people in need, in more ways than you can ever imagine.

But we don’t do it alone. Keeping the “Yad Eliezer miklat” up and running are the donations we receive from our friends worldwide. We consider helping others our mission and we’re grateful that we have our donors as partners in that mission. Helping people and creating refuge are just two mitzvot of the 613.

I mentioned earlier that each miklat is assigned a number. Take a look at ours.
Coincidence?

Read more about how we provide emergency relief for Israel's population here.