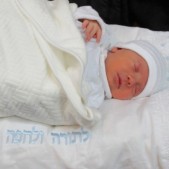 Some Things are Meant to Be

Hashgacha Pratis. Divine providence. Whatever you choose to call it-sometimes a story sticks out, that really drives home the idea that "some things are meant to be." And what follows is a perfect example.

Shira came home with happy news to share with her mother-she was engaged! Unfortunately though, her mother, a widow, was struggling to provide for her family after Shira’s father had passed away years before. Shira didn’t know how she would be able to afford a wedding- there wasn’t money for even a modest celebration. But after contacting Yad Eliezer and with the help of generous donors, Shira was able to have a beautiful wedding at Armonot Friedman, Yad Eliezer’s wedding hall in Bnei Brak.

Shortly after, a call came into the Yad Eliezer office. Avraham G. was on the phone and he wanted to make a donation-in specific, he wanted to sponsor a bris for a needy family. Sponsoring a bris is a beautiful idea, though not something that is usually done through Yad Eliezer. However his information was taken down and he was told that if this specific need arose he would be contacted. Weeks went by and his offer remained unfulfilled.

Now, let’s get back to Shira...
Happily married for about a year, Shira once again had some good news-she had given birth to a healthy boy! But burdened with daily expenses and the added costs of a new baby she worried-where would she and her husband find the money to pay for a bris? Shira then remembered who had helped in the past, so she approached Yad Eliezer again.

At first it wasn’t clear where the funds could come from-until the name Avraham G. came up.

It was a long shot. Avraham’s offer had been made so much earlier. Was it still good? Would the money still be available? Likely he had found a recipient already, but the phone call was made anyway.

“Hello Avraham, I’m calling from Yad Eliezer regarding your offer to...”
“For the bris!” he interjected.
“Yes, is it too late? Has the money been used already?”
“No, I was waiting for you! How much do you need?”

A new mother’s worries were put at ease and a lovely bris was made.
Hashgacha. Divine intervention. Meant to be.