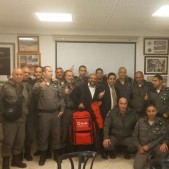 Make a donation for IDF soldiers

One of the things that never ceases to amaze me is wide variety of dedicated individuals who make up the Yad Eliezer family.

Meet Emma, a 12 year old girl from Williamston Michigan. As her bat Mitzvah approached, her Montessori style Hebrew School expected all of the students to pick a Mitzvah Project as part of their celebration. Emma is a second degree black belt in Taekwondo, and has a lot of respect for Krav Maga, the Israel Defense Force’s version of hand to hand combat. She understands the importance of people being able to defend themselves, so she decided that in honor of her Bat Mitzvah she would like to do something special for the IDF.

After doing her research online Emma decided to make her donation through Yad Eliezer which her Hebrew School director knew was a reliable charity. She contacted the Israeli office, and told Yosef, the representative what she wanted to do. Yosef contacted one of his friends in the IDF and asked what they really needed that they didn’t receive from the IDF directly. The commander said that with the current wave of knife terror attacks what they needed most was advanced first aid kits with more essentials than they usually had on hand.

When Emma sent out her bat mitzvah invitations she told her friends and family about her Mitzvah Project and asked for their support. Some made donations online and others gave Emma checks directly. When she realized that the total amount she had raised was exactly enough to get three top notch first aid packs she was amazed at the serendipity.

Emma’s mother comments, “I’m constantly amazed at Emma’s poise, motivation and responsibility. She decided to do this project and followed through with it on her own. She really pulled this off by herself without any prompting from me. I’m amazed by her spirituality and generosity.”

Emma will be completing for the upcoming Taekwondo world championship. We already know that she’s a champion, and wish her great success in all of her future endeavors!

The first aid packs have been distributed to Border Control units, including the unit that lost Hadar Cohen in the line of duty as she courageously defended civilians from a terror attack earlier this week. 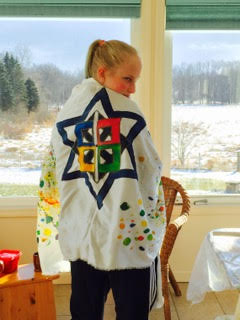 Here’s Emma with a unique creation she made with a friend. The symbol combines the star of David and the Songham star of the American Taekwondo Association. The taekwondo logo is also full of symbolism with many values that we Jews also hold dear, such as honor, discipline, respect, and integrity.