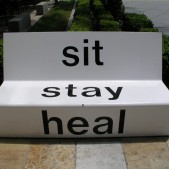 On a personal note...

My heart filled with that special feeling that isn't quite pride, rather a deep satisfaction in the ultimate good nature of human kind.

First a little background. Three years ago immidiately after the birth of my youngest child I found myself in a frightening situation. A marriage that had been difficult for years became unbearably violent, and I found myself alone with my children and no means of support... and only one year away from completing my training as a therapist, which would allow me to provide for myself and my family respectably.

I turned to Yad Eliezer's Job training program, and they helped me complete my training.

At this point I am living my dream, working in a profession that is both profitable and meaningful and supporting my family without lack.

I recieved a phone call this week from a woman who told me that she wanted to come to therapy to work on her self esteem. She asked me if I would be willing to make a home visit as she recently gave birth via cesarean and it is hard for her to get out.

When I came to her home I met a most impressive woman who we will call Avigayil and heard her terribly heartbreaking story. Avigayil and her family made aliya from Ethiopia when she was ten years old. As the oldest child and a smart learner she quickly became the caretaker of the family, helping her younger siblings with school and even helping her parents with the many challenges that they faced.

As a teen Avigayil became more religious. Her faith blossomed and became a tremendous source of strength that helped her face the difficult circumstances of her life: poverty, loneliness, and her parent's marital strife.

When she met her husband she was sure that she was beginning a new stage of life. Their family would be filled with peace, mutual support and cooperation. It didn't take long for her to realize that her dream had become a nightmare. The emotional abuse was worse than the physical abuse and it reached her very tortured soul. During her recent pregnancy she realized that she had had enough, and that if there was any hope that her children would break the cycle of poverty and abuse she needed to raise them alone.

With virtually no family or community support she filed for a divorce and took the necessary steps to protect herself and her children.

Sitting before me was a woman of incredible strength, faith and determination. A month and a half after birth she was determined to do whatever it took to heal herself and provide a nurturing environment for her children. And she was clearly in need of a lot of help.

I asked her if she was receiving the government support that she is entitled to and she replied in the affirmative. But that amount isn't enough to maintain even a small apartment and provide for her children. I wondered if I might turn to Yad Eliezer on her behalf and then she told me:

"I met Dov Wiesel. The man has a heart of gold. He arranged for me to receive formula for my baby, as well as a monthly food box and vouchers for the supermarket. Aside from his practical help I got the feeling that he really believed in me and that somehow things will get better..."

I made it out of a tragic situation and rebuilt my life. And Avigayil will too.