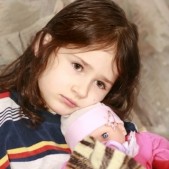 A Better Future for a Widow and Orphans

Chana was sitting on the beach of the Kinneret with her children on a family vacation when a huge wave rushed over her and overtook her. Chana did not know how to swim. Her family was shocked by the freak accident and struggled to continue life without a mother at home. After having spent two years raising his five children alone, Moshe remarried. His new wife Sara had three children of her own, but with his job as a computer programmer he was able to provide for all of their needs. They hoped to create a warm home for the bereaved children, and together build a happier future.

Six months into their marriage Moshe suffered a massive heart attack and passed away. Sara, now twice widowed was left on her own with all eight children, and no means with which to provide for them. Two days after the shiva a representative of Yad Eliezer came to their home. As he was speaking to Sara, the shocked mother, the youngest child walked around the house turning off the lights, explaining that there was no one to pay the bills any more.

Moshe’s children had only known their step-mother for six months. Having lost both parents within three years of each other, the pain, loss and loneliness are staggering. Sara twice bereaved is overwhelmed from the emotional aspects of her situation. Coping with the financial side is completely beyond her current ability.