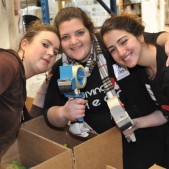 A Visit to the Warehouse!

I met Yossi Kaufman, the Director of Public Relations on my first day at the office. In his warm and endearing manner he invited me to come to the warehouse and see what goes on there.

I hear from people who have volunteered at the warehouse that it is a lot of fun, and that all kinds of groups from all over Israel and all over the world come to do it. I wondered why. I mean, putting food in boxes for poor people might be meaningful, but fun?

When I arrived, a group of post-high school girls were smiling, bubbling and joking as they finished taping shut the boxes they had packed. They seemed to be having fun, but how? It was sweltering hot; the industrial fans did little more in the face of the Mediterranean heat than make conversation virtually impossible because of the noise.

When the group left I asked Yossi, “What’s the secret? It’s hot, it’s noisy, but they seemed to be having fun. How do you do it?”

He told me that it is just the joy of the mitzvah. I wasn’t convinced, but I figured I would wait half an hour until the next group came in and see what he does with them.

In the meantime, I gathered some interesting facts. Yad Eliezer sends food packages to between three and seven thousand families a month, all over Israel. It starts with the donors who send money. Itzik then finds the cheapest suppliers, buying huge amounts, and getting wholesale prices even better than the large supermarkets, about half the retail price. Ten thousand packages of pasta pass through each month. How many noodles is that? In addition, 12,000 young volunteers go door-to-door collecting over a million dollars worth of food that is delivered to the warehouse, repackaged, and forwarded to the needy families. Packing all of those many thousands of boxes would be a few full time jobs if not for the volunteers who come to the warehouse. When you put it all together, the result is literally tons and tons of food delivered where it is needed most, at rock bottom cost. Every dollar donated to Yad Eliezer for food ends up buying twice as much food as if you had given it to the poor family directly!

Soon the Retsky family came in looking pretty hot and worn out. Yossi insisted that they drink and sit down as he told them a little about Yad Eliezer. When they were ready to start, Yossi got them some boxes and supplies with which to fill them. I was impressed with the family’s team work. They divided the tasks between them. Aaron, whose Bar Mitzvah had inspired the trip to Israel, worked alongside his father the doctor, together with his two sisters and mother. It was a team project, and the enthusiasm built as they went along. When they finished the first twenty boxes they had committed to, they were ready for more. The music was pumped up, and more boxes brought in.

I asked participants of the groups that I met what it is about the volunteering that they enjoyed so much, as they were all clearly enjoying themselves.

“I never thought about how much work goes into a project like this!” – Yocheved from Lakewood

“They make such an effort to make it nice and respectable; nothing broken or crumpled, everything standing up straight. They want people to feel good opening it. Thinking that I am a part of the joy this will bring to them makes me feel good about being a part of that.” ? Chaya from Baltimore

“Yossi has a way of making it a very real and positive experience. It’s a satisfying feeling as a volunteer to see that you are making a concrete difference, and that your effort is appreciated.” ? Aaron from Chicago.

While I was there I heard about two very special families that had recently volunteered in the warehouse, but I’ll save that for next time.