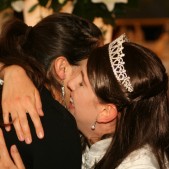 It's interesting, walking around Yad Eliezer it's often hard to guess who is a donor, who works here, who is here to get help and who is volunteering. Mrs. Samet had come in because she is involved in marrying off a young lady in her thirties who comes from a non-religious background to a man who was orphaned. They have no money, and Mrs. Samet adopted them. She turned to Yad Eliezer for help in planning the wedding, and helping the bride set up her home. Together they were able to provide shoes, clothing, and some basics for the house as well as catering for the wedding, which will take place in a synagogue.


I asked Mrs. Samet how she came to be involved with Yad Eliezer. In her warm motherly
manner she told me about the first bride she adopted, a convert with no family or support,
and then her friend who heard the story and also asked for help when it was her turn to marry.
She was happy to carry these great mitzvoth herself as long as she could, but when word got
out that she was an address to turn to, the need was greater than her ability to provide. She is
overwhelmingly grateful to the donors of Yad Eliezer who help her marry off "her" brides. She
told me another moving story about two sisters whose parents were both mentally ill and unable to care for them. For two years they had not gone to school! When Mrs. Samet found out about the situation, she found them an appropriate school with a dorm, that didn’t ask for tuition. But they did need a large sum each month to pay a private tutor to catch the girls up on all they had missed. When Mrs. Samet was unable to find the funds herself, she turned to Yad Eliezer and was overjoyed when they took up the cause. The girls are now learning and thriving.


I told you last time that I am learning to be a therapist. As part of my training I did my practicum at a government agency. The stories that I dealt with there were similar in some ways, but the experience was totally different. I'm trying to put my finger on what it is exactly about this place. There people were giving and people were receiving, but it was always clear who is on which side of the fence. Here there is a sense of warmth and camaraderie, almost like a family that is glad to be providing for the needs of its own children. I am deeply touched by the integrity and dedication of the people I meet here. It is an honor for me to count myself among them!