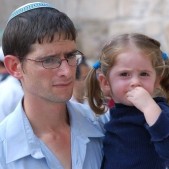 A Light in the Darkness

When the Yasgur family immigrated to Israel from South America, they were as happy as they could ever imagine they would be. But one year after their Aliya*, Mrs. Yasgur died and left a broken husband and seven children. This Pesach was especially trying for them because it was the first one without their wife and mother.

Mr. Yasgur and his oldest child tried to cook and clean and keep the family together, but it was an almost insurmountable job. Benno Yasgur had to stop working so that he could care for his children and keep them together. He, together with his 14 year old child, did everything they possibly could for their family. But it was not enough, and what happened here is something that is sadly a common path for families in trouble.

First, the rent that they were paying for their apartment became too much and they moved to a machsan*. The oldest girl stopped going to school because the family’s burdens rested squarely on her young shoulders and then there was no longer adequate food and clothing.

Yad Eliezer began a special collection for this family. They needed someone who could come in and cook and clean and care for the children. Many of you helped with this special case through our emergency fund and through “Milka’s Special Fund”.

Thank you for making an enormous difference – for the Yasgurs and so many other families!