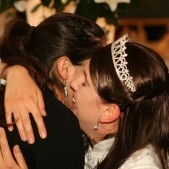 7 weeks have gone by since our engagement, it feels like eternity... I’ve been waiting for the money my father had assured me he would secure for my basic bridal needs, but today we found out that that will not be happening... My father’s boss refused him any time off, thereby not allowing him the availability to make all the necessary arrangements for the wedding.


With a heavy heart, my father explained that due to the circumstances at hand, I would have to try and help make some of the arrangements myself. He explained that there is a wonderful organization by the name of Yad Eliezer that he is sure will do their best to help us.

The next morning I found myself standing in the Yad Eliezer offices, suddenly embarrassed and slightly ashamed, I walked over to the lady sitting behind a desk, she introduced herself as Milka she seemed caring and compassionate, as soon as I opened my mouth I began to cry..

Sara walked over to me; it was obvious that she was distraught. I offered her a seat and a listening ear. She began to tell me her story, within seconds she broke down crying uncontrollably. She explained that she is getting married in a few weeks and has nothing, no clothes, no shoes, and no appliances for her new home. There happened to be a donor standing nearby, that overheard the whole conversation; he immediately pulled out his check book and wrote out a generous check. After speaking with Sara’s father it became clear that this family had nothing ready for the wedding, with some inquiry into the family’s situation, it turned out that Sara’s father has been wearing a torn suit for 8 years that he received second hand from his brother. The situation was dire and Yad Eliezer was set on helping them. The Young Israel of Kew Garden Hills Charity Fund reached out to the family and gave them the ability to purchase new clothes and accessories for the wedding. Yad Eliezer gave Sara a Kol Kallah voucher that helps kallahs get household items and appliances,

Thanks to the kind donors the wedding was absolutely beautiful and so were Sara and her family.

We recently inquired about Sara; we found out that she was unemployed. Sara explained that she is in the process of getting money together for a course that can financially benefit her family. The course trains in painting murals for schools and art seminars. She has taken a strong liking to the subject and is doing everything in her power pay for the program. Sara was unable to afford the full amount on her own; As soon as Yad Eliezer heard of this, they helped pay for Sara’s course via their job training program, and with that Sara was given the opportunity to get the education she needed in order to get on her feet.

Yad Eliezer’s main goal is to break the cycle of poverty and create long term financial opportunities for the future.