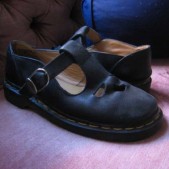 Picture tattered shoes. The cloth is dirty and threadbare. The soles are so worn that parts have simply ripped off. Other parts are held on to the main body of the shoe with peeling, dusty strips of tape. Rain soaks right through. So does the blistering heat of midday summer asphalt. These shoes do little to protect their occupants from rocks, glass, and other dangers awaiting underfoot. They bespeak a life with little comfort, a life with little compassion.

Saraleh’s* face did not match her shoes. Only ten years old, Saraleh’s face was smooth, new. Innocence was written all over it. Her wide eyes and fresh, young features spoke candidly. Only not quite as candidly as her shoes did.

Saraleh had come to the Yad Eliezer offices to show her shoes to Milka Benziman, Yad Eliezer’s kind, warm social services director. Milka saw more than Saraleh’s shoes. Milka saw the living circumstances that made such shoes possible. Children with enough money to live normal lives do not wear shoes like that. Children with shoes like that lack more than comfort. They lack food. They lack normalcy. And without Yad Eliezer’s help, they may lack a decent future.

Milka’s eyes bristled with tears. Years of listening to the pain and frustration of the poor of Israel has done nothing to harden her extraordinary heart. Taking Saraleh’s small hand, Milka walked her into Dov Weisel’s office. Dov, manager of all of Yad Eliezer’s operations, has also seen a lot in his time. He has to see it. He runs the largest anti-hunger charity in Israel. But the contrast between Saraleh’s sweet face and her dirty, tattered footwear shocked even him.

All Saraleh wanted for the upcoming new year was a pair of new shoes. She wanted to know whether Yad Eliezer could help her buy them. There are hundreds of Saralehs out there. What kind of Rosh Hashana do you want to have this year?