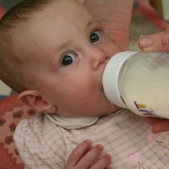 How You Are Making a Difference: Feed-a-Baby

Severe birth complications have left Sara* in a coma for the past three months. Her impoverished family would have been without recourse were it not for Yad Eliezer’s assistance. The mounting expenses of specialized baby formula for the infant have been fully covered. Thankfully, Sara has been emerging from the coma over the past few days.

Thanks to your donations, some 2,000 infants receive Yad Eliezer baby formula every month. When asked whether this program was significantly affected by the recent recession, administrator Shlomo Kroizer shook his head. “Of course not. How could we take a bottle out of a baby’s mouth?” Yet thousands of impoverished infants currently still must be refused assistance due to the program’s limited funding.

A new Yad Eliezer initiative called Baby’s First Mitzvah calls upon new parents, friends, and families to honor a new arrival by feeding a hungry infant in Israel. Participation in the program costs just a dollar a day. A pretty commemorative certificate including the honored new baby’s name and birthday make the perfect baby gift.

During Ilana Benyamin’s* second pregnancy, the Benyamin family’s one-and a-half-year-old firstborn was diagnosed with terminal cancer. The next eight months were a nightmare. Ilana and her husband Yonatan* both had to quit their jobs to attend to the full-time demands of a child undergoing treatment. Somewhere in there, the second Benyamin child was born. Nursing was not an option under the circumstances. The emergency medical needs had depleted the family in every way, including financially.

Yad Eliezer stepped in with formula for their infant and support for Ilana and Yonatan. Months later, Ilana thanked Yad Eliezer: “You brought up our baby.”

Thousands of Israeli young adults are building lives of their own today thanks to the donations you made to the Feed-a-Baby program twenty years ago. What would their lives look like if they had suffered infant malnutrition during their first months of life? This program changes the face of Israeli society, and you continue to make the difference to future generations with your donations today.

When Tamar Cohen* took her baby to the doctor, the examination ended with an explosion. Turning on Tamar, the pediatrician yelled, “How do you expect your baby to survive if you don’t feed him? Don’t you realize that this infant could develop permanent developmental retardation if you don’t give her enough to eat? Your baby is suffering from malnutrition. What’s wrong with you?”

Tamar left the doctor’s office in tears. How could she explain that there was simply never enough money in her pockets to purchase sufficient formula for her little girl? There certainly wasn’t enough food in the house for Tamar to be able to nurse. She had been diluting bottles of formula with large amounts of water in order to stop the baby’s cries, at least for a little while.

Thousands of infants like Tamar’s wait to be accepted to the program’s limited roster.

Infant malnutrition can have devastating long-term consequences including brain damage, developmental retardation, growth retardation, goiter, blindness, anemia, and a host of other tragic conditions. Although the Feed-a-Baby program began in the eighties, Yad Eliezer founder Hadassa Weisel still takes the time to personally look into every case submitted for assistance.

Each baby accepted to the program receives six boxes of Materna baby formula every month until age 12 to 15 months. Formula type is selected for children’s individual nutrition sensitivities and needs. Delivery and administration costs are kept to a minimum through a nationwide team of 150 volunteers who distribute the formula from their homes. Receiving charity can be embarrassing, but this discreet system maintains the dignity of the poor. Plus, every dollar donated to this program provides double the assistance to a child in need since products are purchased wholesale at half the retail price.

Now that’s what we call a mazal tov.