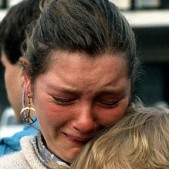 The Looks on Their Faces

I wish you could have seen the looks on their faces. Milka Benziman and Rabbi Yaacov Weisel are two of the most genuinely compassionate people I know. They don’t just talk the talk, they walk the walk. Milka is the social services director of Yad Eliezer. That means that, besides her administrative duties, Milka is the one who sits at the front desk of the Yad Eliezer offices and picks broken souls up off the floor.


I was talking with her the other day when Motti Berger, another Yad Elizer staff member, came up to her desk and urgently whispered, “Milka, there is a lady sitting in the reception area over there crying!” It’s Milka’s job to wipe away the tears, hear the stories behind the broken hearts, and do what she can to direct the impoverished to the Yad Eliezer services that will best meet their many needs.


Earlier that day, the look on Milka and Rabbi Weisel’s faces had been one of disappointment. A middle-aged woman had arrived at the office to ask for help to pay for her daughter’s wedding. This wasn’t the first time she had visited the office for the wedding. She had made several visits, each time being told that Yad Eliezer would try its best to arrange for support to get through the difficult financial demands of the wedding period.


That day, Milka had to say no. There simply were not enough funds to help this woman. The limited budgets of the Adopt-a-Wedding program and the Kol Kallah Bridal Fund had been stretched to the maximum. Someone had to be left out, and this lady was the one.


I saw frustration on their faces, too. Rabbi Weisel has dedicated his life to helping the poor of Israel. Back in the eighties, when there were no other charity organizations feeding the hungry in this country, Rabbi Weisel and his heroic wife Hadassa founded Yad Eliezer out of their own small apartment in Jerusalem. It had grown to encompass nineteen different poverty-relief programs meeting a plethora of needs and serving hundreds of thousands of people – but it is not enough.


“A week until her child’s wedding, and the woman is in tears,” Milka muttered to me, shaking her head in defeat. She lives to replace the tears with smiles, to lift away the night and reveal the gentle brightening of the dawn of a new day. This time, Milka had to watch the tears with nothing comforting to say, and no help to offer.


Milka and Rabbi Weisel are role models for us all. We can be heroes, too. We can feel the pain of the poor with them. We, too, can reach our hands and hearts out to the needy of Israel. And we can share the joy together when the pain of poverty is relieved for a moment, and with enough help, for a lifetime.