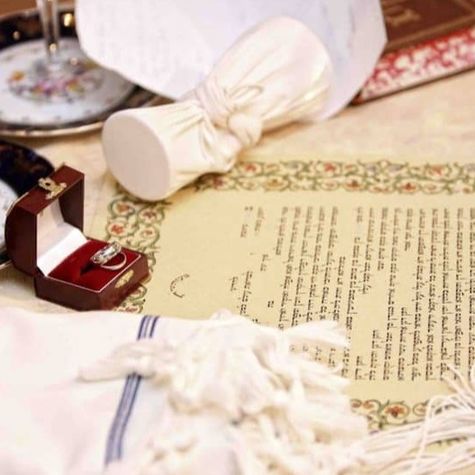 The Roots of Words in Hebrew

Maybe it isn’t necessarily common knowledge, but a large proportion (if not most) of the words in Hebrew are derived from a root word comprised of three consonants from which the word attains its meaning. Though it may not seem possible for those of us who don’t speak or read Hebrew, understanding the meaning of a word becomes quite intuitive, once the root of the word is recognized. So, if you happen to come across two words in a different text with the same root consonants, chances are their meaning is likely connected. Words typically referring to marriage and matrimony in Hebrew aren't excluded from this.
What’s in the Hebrew Word for Bride?
The origin of the world Kallah, the Hebrew word for "bride," is not well understood. It is faced with a double meaning; “bride” as well as “daughter-in-law.” Which is the primary and which is the subordinate meaning? Well, that’s also unknown. Despite our lack of knowledge regarding which is the principal meaning, there’s a lot to be said about how the Hebrew word for bride gained its meaning. A primitive form, or root, of the word kallah, represents uplifted hands extending toward the bridegroom with an open and empty heart, asking him to fill her heart with his presence. The root of the Hebrew word for "bride" is often associated with meaning both filling/completion, as well as wasting away. It is said that our Sages chose the word kallah to represent the Hebrew word for bride because a bride should fill her heart with the hopes and desires of her bridegroom, while hers waste away.
At Least There’s a Little Romance...
I know, not necessarily the most feminist outlook, but let’s be honest - the historical concept of marriage has never really been quite in favor of women, women's equality or their rights and freedoms. It’s been a long, hard road for women, and though the initial meaning of the Hebrew word for bride feels a little rough around the edges by today’s standards, there are romantic undertones to this filling and wasting of desires. Teachings within Jewish literature layout quite plainly, that a man is not complete until he is married, essentially, a bride makes a man complete. On their wedding night, the bride is said to ask her groom how she can demonstrate the depth of her love, thus allowing him to reveal his hopes and desires. The bride and groom form a covenant, reaffirming their endless love for one another.
So, while the Hebrew word for "bride" isn’t quite so feminist, it is a little romantic which is perfectly paired with the (somewhat dry and unromantic, but a little more feminist) legalities of the Jewish Ketubah.
If you’re looking to enhance and beautify the matter-of-fact legalese of your wedding ketubah, you’ve come to the right place. The masterful and poignant ketubah artwork demonstrated by Danny Azoulay is more than just a contract, it is a masterpiece to remind and inspire your marriage for years to come.