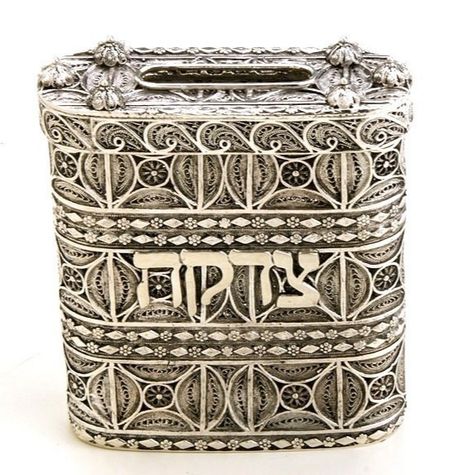 One Family's Weekly Custom Brings Help to so Many in Need

The tzedakah box (charity box, or "pushka") is among the most quintessential Judaica items found in Jewish households worldwide.

Some homes have one, some, several. Growing up, my family had a couple of them sitting prominently on our kitchen windowsill.

They come in all different shapes (ours were rectangular), colors (blue and white), materials (they were metal). It doesn't matter though: heart shaped or house shaped, black, green or rainbow, silver,ceramic or cardboard...
what counts most are the coins that are collected inside (they add up!) and the beautiful thought behind them-that the owner of the tzedakah box plans to use the money within, to help someone else.

There's never a bad time to add coins to a tzedakah box. Sometimes it's the spare change you want to empty out of your pockets at the end of the workday. Occasionally it may be a few coins you found on the street. Often it's before a holiday and it's really common to drop some money in, right before Shabbat. Filling that container is a big accomplishment and once that's done, there's no feeling quite like taking all the insides, and donating them to others who are less fortunate.

David from Asheville, NC recently wrote to us about his family's practice of contributing to their tzedakah box. He noted that he wanted to stay anonymous, as "that is the highest form of charity".

"Every Shabbat, before we gather around the Shabbas candles, I place our wooden tzedakah box on the dinner table and we each put a half dollar coin into it: one for my father, my mother, one for each of my 3 sons, my wife, and one for myself. We also put in other bits of change through the week as they come available, but not often as many things are paid for with plastic. When the tzedakah box is full I discuss with my wife and children where we should give our collection. I have received so many requests for charity, and have researched the charities as best I could on what is available on the internet. The charities that I felt were most deserving were those that fed the hungry, those that supported the forgotten Jews in the former Soviet Union, those that helped pay for the burials of poor, destitute Jews, helping the blind, helping the sick, etc...I learned recently that G-d especially approves of charity to those who are the least fortunate in our society, and who more than the widow and the orphan. And who are more deserving than the widow and the orphan living in Eretz Yisrael. We are a conservative Jewish family and I believe that charity begins at home...I researched Yad Eliezer on Charity Navigator and it had a very good rating. So that is how our tzedakah found its way to Yad Eliezer."

Yad Eliezer is so fortunate to have inspiring and thoughtful donors all over the world, just like David and family.
We can't thank them enough for emptying their pockets, filling their tzedakah boxes and helping us help so many.
Their motivation and generosity really create change.